Our Beer Pong Stag Party Idea is very simplistic but always great fun.  The aim of the game if simple. Beer Pong is generally played by teams of two in which each team takes turn throwing a table tennis ball into the other team’s cups. Once a ball lands in a cup, the cup is taken away and the opponent then drinks the contents of the cup. If both teammates hit cups, the balls are rolled back and they get to shoot again. The team that successfully hits all of the opponent’s cups wins the game. Since there are a vast amount of variation on the game, it is good to quickly go over things like racks and bouncing/swatting before the game begins. Winner of the game typically stays on the table and awaits next challenger. A list is generally formed to keep track of who is next to play. 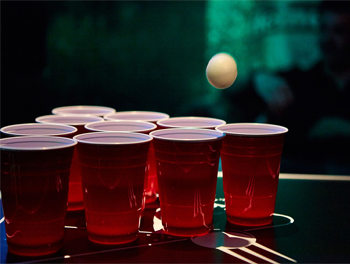